the Alaskan interior brown bears known as Toklat grizzlies, named for the braided glacial river that flows through the middle of Denali National Park and Preserve. 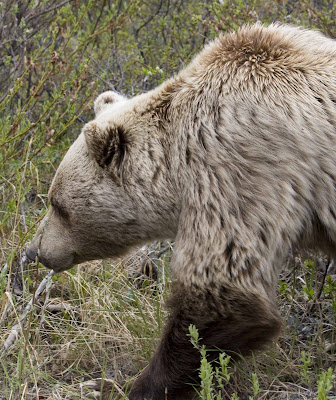 Toklats, living in the food-poor interior tundra, aren't big – averaging about 500 pounds, they are considerably smaller than the biggest male black bears in my home state of Pennsylvania, which can exceed 700 pounds. And compared with coastal brown bears, which can tip the scales at more than 1,500 pounds, they're pikers.


But what they lack in sheer size they make up in a solid presence and attitude, especially in early summer when the bears are still in their thick winter pelage, which highlights the distinctive tawny-colored body and dark legs typical of Toklat grizzlies.

In our time teaching at Camp Denali earlier this month, we saw lots of griz – one of the best (and occasionally alarming) things about being in the park. Along the partially frozen Savage River, we watched two caribou move nervously on the ice, unwilling to pass within a hundred yards of a sow grizzly and her two large cubs; when the female caught wind of the caribou, she came loping, but it wasn't a serious attack. (The next day, however, she had killed a moose calf in the same area.) 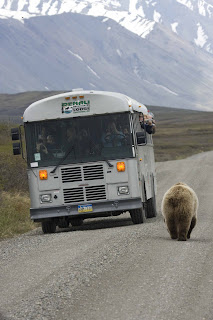 Along the East Fork of the Toklat, not far from the old ranger post cabin in which pioneering naturalist Adolph Murie worked while conducting his landmark wolf/Dall sheep studies in the 1930s, we encountered an adolescent grizzly, probably on its own for the first time, lying atop a red fox den in a thicket of willows.

At first, the bear was content to munch on mummified snowshoe hare carcasses lying around, but eventually it smelled food underground – fox kits – and began trying to dig through the tangled roots and rocks that protected the den.

Anyone who's seen a grizzly dig knows how much strength they possess in those massive forequarters. Once, along the Alagnak River, a guide and I spent three hours rolling massive driftwood spruce logs into a four-foot-deep gully and then shoveling several tons of gravel over top of them, to create a landing strip for a small plane. Then, while we waited for the plane, a bear came along and, suspecting food was cached beneath all that freshly dug earth, simply levered up the huge logs through all the gravel like they were jack-straws, while we watched, helpless.

So the foxes understood the danger, and attacked the teenaged bear, nipping the its flanks, barking and yowling, just barely avoiding the swatting paws and lunges. The bear seemed only half-interested, and kept wandering away, only to be lured back by the possibility of a meal, sending the foxes into new paroxyms of distress. The drama was still going on when we finally left.

I've had some heart-stopping encounters with grizzlies while on foot in Denali, but this time, the bears we saw while hiking were comfortably distant, and the close-up encounters occurred while we were in vehicles. One of the best came on our final day, when we and several Camp Denali guests were heading out of the park.

Just shy of the Eilson Visitors Center, we encountered a bear ambling up the middle of the one-lane dirt road, which in this area makes some stomach-lurching hairpins around thousand-foot-high bluffs (no guardrails). We ever-so-slowly followed, since we could hardly go around. Then, as the bear reached one bend, it met another grizzly coming the other way.

The bear we'd been following appeared to be a boar, the second one a sow – but the male gave way, scrambling up a steep slope, peering down nervously. The sow followed suit a few minutes later, and they faced off with growls and roars, baring their teeth and taking a few swipes at each other. Whether it was territorial aggression or courtship behavior is hard to say – both activities look a lot alike among bears. (The photo's a bit soft -- low light, rain and a hand-held camera.) 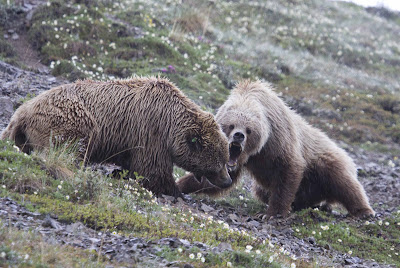 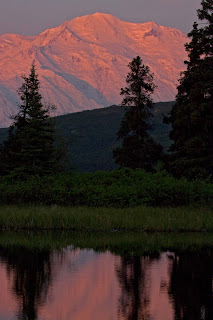 Apologies for the long hiatus between posts; I've been home very little this spring. Here's a bit of what I've been up to.

The first time I visited Alaska, nearly 30 years ago, I fell in love with what the locals like to call the Great Land. I've been going back almost every year since, I've been able to travel to some of its most remote regions, from the western Aleutians and Alaskan Peninsula to the Yukon-Kuskokwim Delta, Pribilof Islands and the North Slope.

But no place is more magical than Denali National Park and Preserve, in the Alaska Range of the southern Interior. Nowhere else in Alaska is it easier to observe large mammals and the full range of subarctic birds, from grizzlies to diminutive Wilson's warblers - and there's no better time to visit this 6 million-acre wilderness than early in June, right after iceout, when the moose and caribou are dropping calves, and the migratory birds have returned from wintering grounds as far-flung as Africa, the Philippines and South America.

Earlier this month, Amy and I spent more than a week in the heart of the park and preserve, based out of Camp Denali, one of the best ecotour facilities I've ever had the pleasure of visiting. We were what Camp Denali calls "resource leaders," there to assist the staff naturalist-guides on daily birding forays, and I was subbing for my old friend Stan Senner of Audubon Alaska, who's been teaching at Camp Denali for years but had to miss these sessions.

Just getting to camp is half the adventure - a seven-hour bus trip along the 90-mile dirt road that bisects the wilderness core of the park (the original Mt. McKinley National Park, before the park and preserve was tripled in size in 1980). Along with the staff, we pointed out caribou and Dall sheep, harlequin ducks and beavers, willow ptarmigan and a great horned owl nest with two fluffy, almost-ready-to-fledge chicks.

We saw more than half a dozen grizzlies, including one that upended our plans for a picnic dinner along the East Fork of the Toklat River - it was busy trying to dig up a red fox den (to 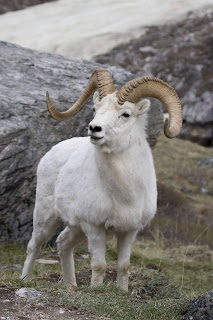 the frenzied alarm of the foxes, which yowled and nipped and avoided the bear's swatting paws) just a few yards from where we were supposed to eat. No one complained about delaying the meal a few hours, while we watched the drama - though we had to leave before we learned whether or not the bear was ever successful in breaching the den.

Camp Denali is a mix of rusticity and decadence; the one-room cabins are heated by woodstoves and lit by propane, each with its own outhouse, but the dining room
Dall sheep ram (©Scott Weidensaul)
was a brand-new timber-peg structure with drop-dead views and a modern kitchen that turned out extraordinary meals. On clear nights, the sky dimmed a bit after 1 a.m. when the sun dipped slightly below the horizon, but you could still read on your porch, with the more than 20,000-foot summit of Denali/Mt. McKinley (take your pick; Alaska calls it the former, the U.S. Geological Survey the latter) bathed in rich pinks and oranges again at 3:30 a.m. with sunrise.
The birding was simply wonderful, even from the outhouse. Ours perched on the edge of a 500-foot rise above Moose Creek, and from it we were serenaded by Swainson's, gray-cheeked and varied thrushes, with white-crowned sparrows, orange-crowned and Wilson's warblers everywhere. Our first morning, two flocks of several dozen gray-crowned rosy-finches flew over camp, considerably lower than these alpine birds are usually seen.

The routine was for me to lead a 5:30 a.m. birdwalk, then after breakfast everyone would make their own sack lunches and spend the day in the park with guides. Among the favorite destinations for our birding groups were a series of glacial kettle ponds around Mile 81 on the park road, and Ranger Pond, close to the Wonder Lake ranger station -- lots of lesser scaup, buffleheads, pintail, green-winged teal and wigeon, along with lesser yellowlegs, least sandpipers and a few red-necked phalaropes. Greater white-fronted geese, Arctic terns, long-tailed ducks (the drakes in their black breeding plumage) and black and white-winged scoters were also around, and we often saw northern harriers and short-eared owls hunting the surrounding tundra. We watched common loons on their nest, and gray jays hitting us up (unsuccessfully) for a handout.

Not far from camp, the park's ornithologist Carol McIntyre had earlier discovered a gyrfalcon nest, which we could watch through a spotting scope; one day as one of the adults flew by, it took off after a northern goshawk that was intruding on the nest territory; although a goshawk is a big, tough bird, it wasted no time in lighting out for safer terrain with the gyr in pursuit.

I'm only home for a brief time between trips, but will try to post a few more episodes from Denali before hitting the road again -- fighting grizzlies, alpine hail storms, and more great Alaskan birds. 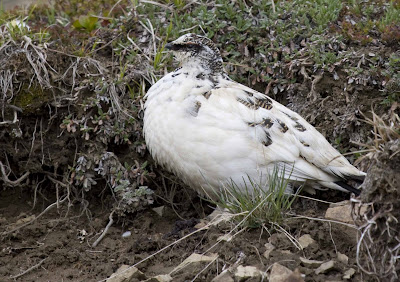