Got back last week from southwest Florida, where I gave a series of lectures, including talks at Ding Darling NWR and the Southwest Florida Birding and Wildlife Festival.

It was, as most of my visits to Florida are, a mix of the sublime and the emotionally wrenching. It was wonderful to revisit favorite haunts like the Fakahatchee Strand Preserve State Park and Collier-Seminole State Park with Amy and a couple of friends in tow, to watch big flocks of warblers and gnatcatchers moving through the pine flatwoods, or finally see my first wild indigo snake, an endangered species – though the fact that the snake was being eaten by a young red-shouldered hawk left us with decidedly conflicted emotions. It was nice to escape the snowy mountains for a few days, chasing purple gallinules and wood storks, watching short-tailed hawks, or finding a baby red rat snake.

But. There's always a very big "but" for me when it comes to visiting this part of Florida.

For a long time, this was the forgotten part of the Sunshine State, but that hasn't been the case for decades. Naples and Ft. Myers are metastasising with little apparent thought or planning, just a binge that will only end when every inch consumed by a tide of overpriced homes, golf greens and an endless, soulless swarm of Publix, CVS and Winn Dixies.

Yes, there are good things happening in southwest Florida for conservation, attempts to undo the wrongs of the past on the big chunks of land that are protected – like the ongoing work to close up 1960s-era drainage ditches in the old Golden Gate Estates boondoggle, which wrecked the hydrology of much of the Fakahatchee Strand, Florida Panther NWR and the Ten Thousand Islands and Rookery Bay estuarine reserves.

The problem is, the insane rush to build on every square meter that isn't formally protected more than offsets the gains, and (though this is a small thing in the great scheme) manages to rob my time in Florida of much of its pleasure. For a week, virtually every road and highway I drove was under expansion – two-lanes going to four, four lanes to six, six lanes to eight. Coming down I-75 and then Rt. 951 toward Rookery Bay, the longest stretch I drove without passing new construction was maybe half a mile. The redundancy of it all surpasses understanding, but the most surreal moment came when I found myself looking at competing Dunkin' Donuts and Subway shops, facing each other across the intersection like mirror images.

I felt like an accessory to a crime just being there, and the obscene recklessness of it cast a pall on my mood much of the time. By the end of the week, driving back to the Ft. Myers airport past one new golf course subdivision and shopping mall after another, I'd seen enough. It was time to get back to Pennsylvania Dutch country, cold though it may be.

But I had one more gantlet to run. The airport, itself carved out of pine flatwoods, has of course become the nexus for still more development, and several patches ranging from a few dozen acres to more than a hundred were freshly scraped down to the sandy soil.

But what stopped me dead, made me close my eyes in a laugh-or-cry moment, was the yellow "Panther X-ing" highway sign - right next to the biggest clearing of all.

If I were a panther, I might throw myself in front of a car just to make an end of it. But no matter. Looks like Lee County will be able to retire that sign pretty soon anyway, and save itself a few bucks.
Posted by Scott Weidensaul at 2:42 PM 3 comments:

Hummingbird update, and a Vermont sojourn

Even though the mid-Atlantic region has been in the meteorological mixer the past few weeks -- with several ice storms, snow, a mild spell and now a blast of Arctic cold that sent the mercury to near zero on our back porch last night -- there are still a few hummingbirds hanging around.

At one home in northern Lancaster County, Pa., which had been hosting two rufous hummingbirds for several months, one is gone but one remained earlier this week. An immature male that my colleague Wayne Laubscher banded in October left on Dec. 28, but an immature female that I banded Nov. 18 was still there at last report.

Another immature female rufous, which I banded in mid-November in southern Berks County (only a few miles from the birds mentioned above), made it through the big ice storm on Dec. 18-19, and left on Dec. 20 after feeding heavily in the morning. An adult female rufous that I banded on Halloween in Dauphin County was last seen Dec. 16.

There's a female Selasphorus hummingbird, probably a rufous, in northern New Jersey that's been coming to a feeder since November, and continued two days ago…if it sticks around into next week I'll be making the drive to band it, though I wouldn't be surprised if both of these lingering hummers decide to head south Monday or Tuesday, with the unseasonably milder temperatures being predicted.

If they do, it would fit the pattern we often see – many times, wintering hummingbirds ride out extremely cold or stormy weather at a feeder, then depart when there's a break, usually after feeding heavily for a couple of hours in the morning. 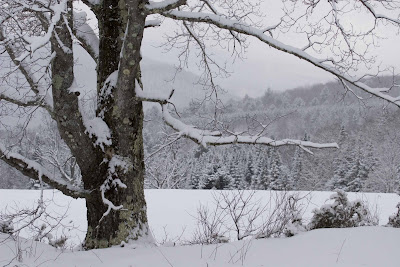 It's been a bit cold and bit snowy here in Pennsylvania lately, but nothing to what the Green Mountain State has seen.

We spent five days last week with Amy's family, snugged into a 200-year-old farmhouse near Rochester, Vermont, on the eastern slope of the Greens. It was snowing when we arrived, it snowed most of the time we were there, and we slipped out New Year's Day morning to try to beat still another storm that dumped more than 16 fresh inches on the region. The weather weenies on the radio said it's been the snowiest December in Vermont since 1874.

In between storms, the place was a classic, New England winter wonderland; fresh powder draping the pines, sugar maples, hemlocks and spruces, the chance to do some sledding (Amy, with her sister and 2-year-old niece) and snowshoeing and photography (me). The birding was pretty slow; mostly ravens, blue jays, and some mixed songbird flocks of chickadees, creepers and kinglets (no boreal chickadees, though not for a lack of trying).

The ornithological highlight was an old, gnarled apple tree in the pasture below the house, which attracted flocks of pine grosbeaks throughout the week, and one exciting but too-short visit by about 15 Bohemian waxwings. Both of these are rare boreal visitors showing up in the East in record numbers this winter, and the grosbeaks were a life bird for Amy (who, sadly, missed the waxwings).

And sadly, I was always either a bit too far from the tree for good photos when the grosbeaks were there, or didn't have a long lens handy if I was nearby. So you'll have to make due with a nice landscape, looking west into the Greens, the horizon framed by one of those iconic sugar maples.
Posted by Scott Weidensaul at 10:14 AM 3 comments:
Newer Posts Older Posts Home
Subscribe to: Posts (Atom)