Barring an especially news-rich morning, I'll be making one of my periodic appearances on public radio's "Weekend America" this Saturday. It's part of a segment in which listeners share their stories of spring, including several about robins - and I'll be talking about the bird most naturalists consider the real icon of spring, the American woodcock.
Posted by Scott Weidensaul at 6:09 AM 1 comment:

On March 17, the New Jersey Senate - by a 39-0 vote - passed a moratorium on horseshoe crab fishing in state waters. The bill goes to Gov. Jon Corzine, who is widely expected to sign it. More details here.

The action overturns the Feb. 11 decision of the state Marine Fisheries Council to lift an existing moratorium - the only one of its kind on the East Coast, and a measure conservationists consider critical for preventing the further decline of the rufa race of the red knot, which has plummeted from a population of more than 100,000 in the early 1990s to near-extinction today. Similar declines are now beginning to manifest themselves among ruddy turnstones and semipalmated sandpipers, two other species that depend on the crabs' eggs during their spring migration to the Arctic.

Should we all just congratulate the N.J. legislature (and ourselves, since conservationists from around the country lobbied hard for this bill) and go back to birding? Hardly. The existing annual crab quota, set by the federal Atlantic States Marine Fisheries Commission, is too high, and the commission should again consider a region-wide harvest moratorium, thus superceding a Delaware state court ruling last year striking down a state moratorium there.

The best source for information on the red knot/crab situation remains New Jersey Audubon.
Posted by Scott Weidensaul at 3:11 AM 3 comments:

No rest for the weary...

I'm blessed to have a remarkably enthusiastic and highly trained banding crew working on the Ned Smith Center's owl research project, but they really don't know when to stop.

Back in October my King's Gap crew, which bands at a state environmental education training center on South Mountain, near Carlisle, PA, started more than two months of nightly netting to catch migrant saw-whet owls. It's fun but tiring, and by the time they finished in the first week of December, they'd banded almost 240 owls.

They'd also fitted several with tiny, 2-gram radio transmitters, which allowed us to find the owls each day on their roosts, part of a study we've been conducting since 2000 to look at roost site and habitat selection. That part of the project has long been overseen by Aura Stauffer, a state DCNR biologist who has been one of our 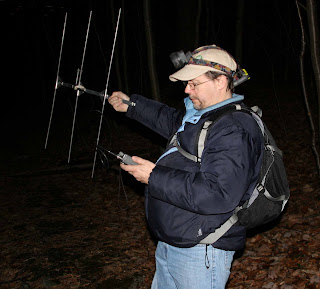 banders for years. So several nights a week Aura was staying up past midnight banding, and most days either she or one of the other volunteers was also out with an antenna and radio receiver, tracking the owls through Michaux State Forest.

One of the birds, radio-tagged Dec. 1 and nicknamed "Grinch," stuck around through at least the middle of February, when the signal from her radio faded and died -- probably empty batteries, which had reached the end of their expected life.

Now, having had just two weeks of rest, the King's Gap crew is moving back into a month of nightly banding again, as we try to document the spring saw-whet migration, which is far less well understood. Tonight was the first night, and my King's Gap site coordinator Gary Shimmel, along with volunteer Rhonda Hackenberg (who with her husband Scott, the park director, lives on the mountaintop) opened the nets at dark. (That's Gary in the photo, tracking the Grinch last month.)

Less than two hours later, Gary called to report that they'd just caught eight owls, and that the woods were full of vocalizations from others. Considering that our entire season total in 2001 (the last time we tried spring netting) was just seven owls, we're obviously off to a great start.
Posted by Scott Weidensaul at 7:35 PM No comments:
Newer Posts Older Posts Home
Subscribe to: Posts (Atom)