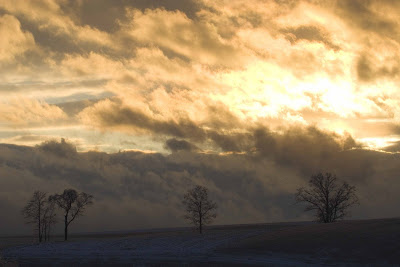 There are always at least two ways of looking at pretty much anything, including the weather.

Some years ago, I was in northwest Alabama, not far from Muscle Shoals, to speak at an ornithological conference. It was late January, but a huge cold front blustering through from Mississippi was spawning tornadoes left, right and sideways. And it was coming right at us.

The conference was in a state park resort, and as I was getting dressed for the opening reception, I kept a nervous eye on the local TV station, which was giving breathless updates. Just about the time the weather guy jabbed a finger at a huge blob of intense red on his radar screen and said, "If you are two or three miles northeast of Muscle Shoals, you should be taking shelter now," the sirens all went off outside.

I skedaddled for the main building as a sheriff's deputy drove past, his voice tinny over a loudspeaker, ordering everyone inside. All the conferees were already there, gathered in the only interior, basement room available – the men's restroom. It was a little tight, but we all had our "Hi I'm ---" name tags, and little paper cups of white wine.

"So you're from Pennsylvania!" one older woman said brightly, as the sirens continued to keen. "I could never live up there – y'all get such nasty ice storms."

I must have looked at her as though she were speaking Urdu. "At least," I said, my voice rising to a tense squeak, "at least an ice storm won't suck you up the chimney and smear you across the landscape in a million pieces!" Her smile froze, and she backed away. Slowly.

So here we are, with our second big ice storm in four days, and it's nasty, all right. But it could be worse. I just got off the phone with a good friend in Oklahoma, where the epic ice storms of the past week have left him without power for seven days and counting, and with all 14 trees on his property smashed and down. I told him my Alabama story and David said sure, he'd take tornadoes any time.

And there are two ways to look at this storm, too. The freezing rain stopped about 3 p.m., and I was crunching around the backyard, assessing how best to remove the big limbs that came down off one of the white pines and took out part of the back fence. Then the clouds parted and shafts of low, late-day sunlight illuminated the landscape. I've lived in this old farmhouse for more than 20 years, and I don't think I've ever seen our valley look as breathtaking. 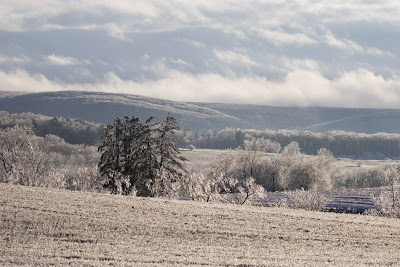 The yard was swarming with birds, trying vainly to get purchase as they landed in the iced-up branches of the crabapple and birches. I heard a slightly strange note from the goldfinches on the thistle feeder, and realized that a couple of common redpolls had joined the flock, the first time in six years that I've seen this Arctic finch down here.

I was hurrying, trying to scrape clean the walkways while taking pictures as the light kept shifting; by now the whole sky was brilliant blue, the land glittering, the drip of meltwater off the trees a cascade that sparkled with backlighting. Yet still more changes were in the offing; the forecast was for 45 mph winds by nightfall, and already, the northwest horizon was gathering dark squall clouds. Once the wind starts to roar, I expect the power will fail as heavy-laden limbs crack and fall throughout the valley, and the ice sheathing the branches of the catalpa trees will shatter against the sides of the house like kids throwing gravel at the windows.

With my friend's experience fresh in my mind, it was an ominous thought. But then, a final band of light hit an isolated clump of trees in a neighbor's field, creating a halo of golden light against the blue-black of the approaching clouds. I grabbed the camera and squeezed off several frames in the second and a half just as the sun vanished and the light went out – and as my perspective changed, once again. 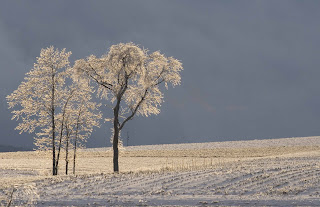 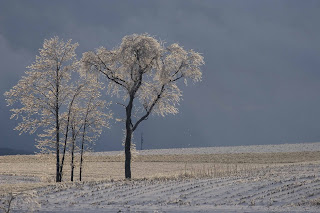 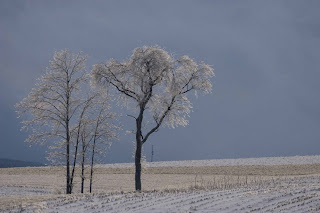 Posted by Scott Weidensaul at 2:27 PM No comments:

We've wrapped up what can only be described as a remarkable season of saw-whet owl banding, and I suspect everyone on my crew is enjoying the chance to get caught up on their sleep. I know I am.

We’ve been banding migrant owls since 1997, and last year was one of the worst seasons on record – only 202 of the miniature owls, the product of two solid months of netting, every rainless night from dusk until midnight at three sites in central Pennsylvania.

This year was a stunning difference, though. As I've explained in earlier posts, this autumn marked the peak in a four-year cycle in saw-whet populations, and coincided with a crash in the number of small rodents in Canada. The result was an "irruption," a great wave of owls flooding south into the eastern U.S.

When we furled our nets for the last time a week ago, we'd netted 895 saw-whets – 393 of them at our Hidden Valley site in Schuylkill County, 284 at Small Valley in Dauphin County, and 218 at King's Gap in Cumberland County. Each owl was ringed with a lightweight, government-issued band stamped with a serial number, measured, and released.

Twenty-three of the owls we caught, though, were already banded, and these so-called foreign birds are always an exciting highlight. Thanks to a network of owl researchers called Project Owlnet, and the federal Banding Lab's online reporting system, we were able to quickly determine where most of these birds came from – and the results often surprised us. 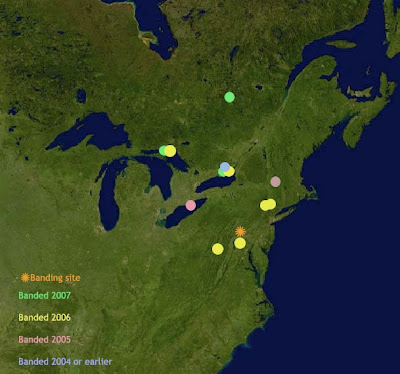 Where our autumn 2007 owls came from.
Not surprisingly, many of the recoveries were of owls banded to our north, at places like Prince Edward Point Bird Observatory, on the north shore of Lake Ontario (seven owls) or Timiskaming and Hillardtown Marsh, near the Ontario/Quebec border (two owls). While many of the owls were banded earlier this fall, about half had been banded in previous years, including two banded in 2006 in the Shawangunk Mountains of southern New York, 2005 owls from Long Point, Ontario and Williamstown, Massachusetts, and a 2004 bird from Prince Edward Point.

The most remarkable foreign owl was the first of the season, netted Oct. 7 at Hidden Valley – a bird that had been banded at the end of July as a juvenile at Whitefish Point, on the upper peninsula of Michigan. It was one of more than 700 saw-whets the Whitefish Point Bird Observatory banded this summer, most of them in the "chocolate" juvenile plumage. Given that our site is almost 600 miles east/southeast of the UP of Michigan, it's an indication of how widely these birds wander.

Even though we've wrapped our nets for the season, the migration continues; Holiday Beach, Ontario, reports a few saw-whets still passing through, and I'll continue to net in the yard the rest of the month. And last week, my good friends and colleagues Bob and Martha Sargent netted a couple of saw-whets in north Alabama, where I suspect the big push has yet to arrive.
Posted by Scott Weidensaul at 11:18 AM No comments:
Newer Posts Older Posts Home
Subscribe to: Posts (Atom)