There's been some encouraging movement in New Jersey on the dire situation regarding red knots and overharvested horseshoe crabs. Since the NJ Marine Fisheries Council voted 5-4 to lift a moratorium on crab harvests on Feb. 11, there has been a bipartisan movement in the state legislature to institute a permanent harvest ban.

You can read updates on the situation from New Jersey Audubon here. And you can read a recent news report from the Asbury Park News and a far less objective piece from the Press of Atlantic City, which focuses only on the watermen's views. (One could argue, for example, that a resource management council comprised primarily of commercial fin-fishermen, shellfisherman and fish processors constitutes a "special interest" of just the sort criticized.)
Posted by Scott Weidensaul at 8:35 AM 1 comment:

Dark Days for the Red Knot

It's been a bad week for one of the most extraordinary birds in the world.

In an ironic little twist, the same week that PBS has been broadcasting a documentary called "Crash: A Tale of Two Species," about how overharvesting of horseshoe crabs in the Delaware Bay has led to the near-extinction of the red knot, the New Jersey Marine Fisheries Council has narrowly voted down a moratorium on crab harvests in state waters that would have given both species a critical break. 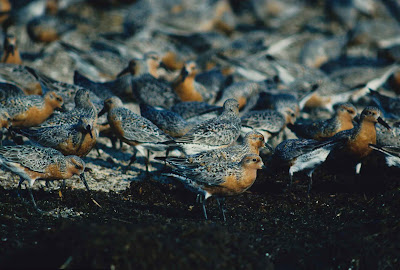 Red knots at Reed's Beach, NJ, in better days, in the late 1980s (©Scott Weidensaul)
This follows on the announcement last week that scientists studying knots on their South American wintering grounds could find only about a thousand of them. Just a decade ago the population was nearly 100,000, and observers in Tierra del Fuego saw them in flocks of 20,000 at a time. Last winter researchers found only 8,000-10,000 total, a 30 percent drop from 2006. At this rate of decline, the knots will be effectively gone in a few more years.

The evidence is overwhelming that overharvesting of crabs, whose once-abundant eggs fed more than a million and a half migrant shorebirds each May along Delaware Bay, has led to this catastrophe. Without sufficient food at this critical stopover site, the knots cannot gain enough weight to continue their migration to the Arctic, and to breed successfully. Ominously, the same thing is now happening to ruddy turnstones and semipalmated sandpipers.

The state Division of Fish and Wildlife urged the fisheries panel to enact the moratorium, noting that male-only harvests have not resulted in any increase in egg production.

But in both New Jersey and Delaware (where watermen overturned a moratorium in court), the interests of a handful of commercial fishermen have stopped any significant progress.

The NJ Marine Fisheries Council's vote was 5-4 against a harvest moratorium, and given the makeup of the council, I'm frankly surprised the vote was as close as it was. The panel's membership, set by law, consists of "four sports fishermen, two active commercial fin fishermen, one active fish processor, two members of the general public, and the chairman of the two sections of the Shellfisheries Council." Like most such fisheries commissions, state and federal, it is heavily weighted toward fishing interests.

In this case, the council decided the right of 39 New Jersey fishermen – that's right, just 39 – to catch crabs as eel and conch bait outweighed the interests of two extraordinary species, and a timeless migratory drama that plays out across 18,000 miles a year. (Never mind that this fishery is less than 15 years old, and is as sustainable as strip-mining. Never mind that the state offered to compensate fishermen for their losses. And never mind the tens of millions of ecotourist dollars that birds bring to the New Jersey shore each year.) 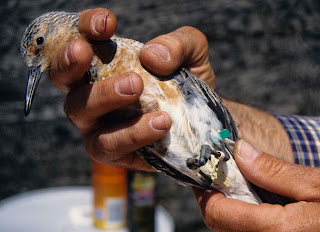 But commercial fishermen have a long and bewildering history of refusing the heed even the clearest warnings of overfishing; expecting them to heed the best available science is like expecting a drunk to suddenly sober up and take the pledge.

The real villain here is the Bush administration, whose hamstrung U.S. Fish and Wildlife Service declined to list the red knot under the Endangered Species Act, despite the most exhaustively documented emergency petition in the ESA's history. An ESA listing would, finally, place the welfare of the knots foremost in the regulatory process.

One reason a member of the NJMFC gave for voting against the moratorium was that, since the feds didn't list the knots as endangered, they must not really be endangered.

In fact, the USFWS admitted that the knot deserved ESA protection, but said that "placing the bird on the endangered species list is precluded by higher priority listing actions for species at greater risk."

The translation: Although we'd like to, our endangered species budget has been purposefully gutted to prevent us from listing new species under the ESA, regardless of how profoundly jeopardized they may be. USFWS named the knot a candidate species, but there is no regulatory teeth behind that designation.

There is still a chance that the New Jersey's legislature could overrule the NJMFC and institute a moratorium. I suspect we're going to see the same kind of up-to-the-last-second drama, in and out of courtrooms, that we've seen past few years.

And in the meantime, the clock keeps ticking on what may become our generation's Eskimo curlew – and shame on us for allowing it.
Posted by Scott Weidensaul at 7:37 AM 3 comments:
Labels: horseshoe crabs, moratorium, overfishing, red knot
Newer Posts Older Posts Home
Subscribe to: Posts (Atom)