I'm odd in a lot of ways – just ask my long-suffering wife – but one of the oddest, perhaps, is that I love being in the woods at night.

Humans are diurnal creatures; darkness leaves us semi-blind, feeling vulnerable. But I revel in being outdoors after dark, since the woods that are so familiar by day seem new, charged with possibility, every sound and smell magnified.

Yet even I feel a twinge of – well, call it unease, as the sun goes down. It only lasts for a few minutes, but when the forest teeters at the dusky edge of night, as the last daylight is seeping away and the shadows are spilling out from beneath the hemlocks and below the fallen logs, something very deep and very primal in me squirms. Nighttime was the time of lions and hyenas, leopards and other big predators that saw early hominids as prey, and our genes have never forgotten it.

But once the darkness settles, that antediluvian twinge vanishes, and I'm free to enjoy the nocturnal forest.

It's something I do a lot of at this time of the year. Halloween is the midpoint in an eight-week research season that rolls around every fall, when I (along with my crew of 18 licensed banders and 85 volunteers) explore the nocturnal migration of the northern saw-whet owl, the smallest raptor in the East, and one of the least-known. 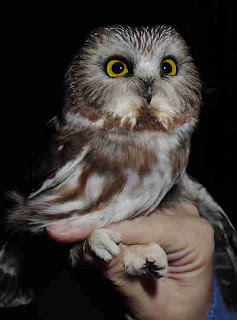 A saw-whet is the size of a man's fist, weighing about 90 grams (roughly the same as a robin), and cute as a button – unless you're a deer mouse or a red-backed vole, of course, in which case, this pint-sized hunter is your worst nightmare. They breed in forested regions across the northern United States and Canada, south in the southern Appalachians, and in the western mountains from Alaska deep into Mexico.

Until the 1960s, they were not considered to be regular migrants, and as recently as the early 1990s, few people suspected they migrate in large numbers down the ridges of the Appalachians, where I live. My friends Eric and Melonie Atkinson first started studying them in the Pennsylvania ridge country in 1996, and I began banding them the following year.

For the past 11 years, I've overseen a major saw-whet study through the Ned Smith Center for Nature and Art in Millersburg, PA, which tries to shed more light on this mysterious bird. Each October and November, at three sites in central Pennsylvania, my crew and I lure saw-whets out of the sky with a recording of the male's territorial call, a mechanical toot, and into our line of long, high mist nets, which hold them harmlessly.

We band the owls with a lightweight, numbered metal band supplied by the federal Bird Banding Lab, take a quick series of measurements, and send them on their way. (A few also receive a radio transmitter the size of a pencil easer, so we can track their movements; a few other sacrifice a few small feathers, so we can analyze their DNA.)

Last night was a perfect night for saw-whet migration. A cold front had roared through Saturday, and all day Sunday, the chill wind blew and the sky was full of puffy gray cumulus clouds. Then at sunset the wind died to flat calm, and the thermometer began sinking toward frost.

My crew of five volunteers and I opened the nets at sunset, and by the time we wrapped things up at 1:30 a.m., we had netted 36 saw-whets – our second-best night since we started doing this work more than a decade ago. One of the owls was already banded, an adult female originally caught in 2005 in Massachusetts; most years we catch several dozen such "foreign" owls, and an equal number of ours are reported by other banders.

Through such work do we learn where and when birds migrate, how long they live, whether they come back to the same breeding and wintering locations, and much more.

But it also allows me to connect with a part of the natural world about which most people are entirely ignorant – the wild, nocturnal part, when legions of little owls flood south across the continent, borne on Halloween winds.
Posted by Scott Weidensaul at 10:31 AM No comments:
Labels: banding, saw-whet owls
Newer Posts Home
Subscribe to: Posts (Atom)